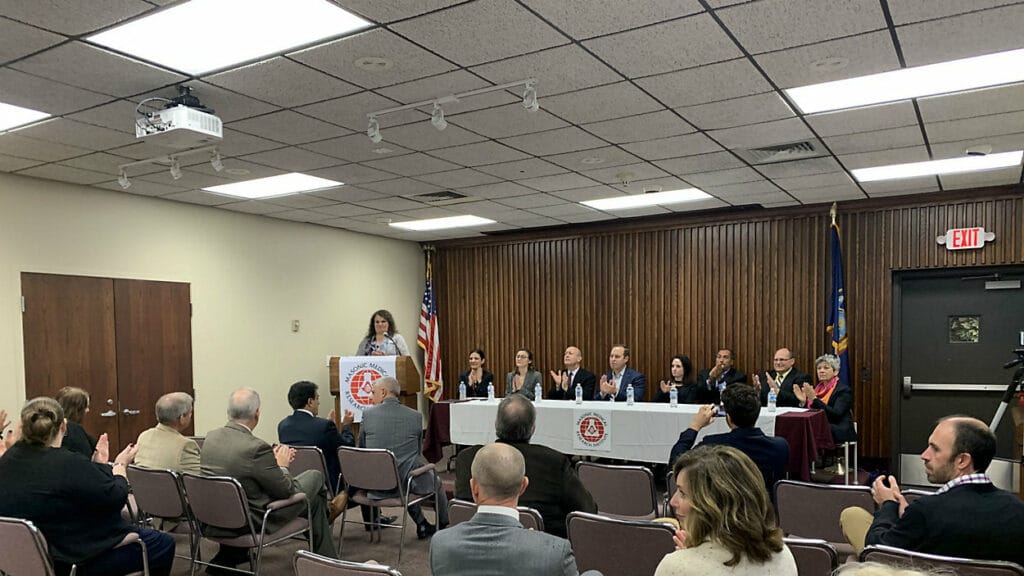 UTICA — Area residents on the autism spectrum will have a chance to help find the causes of, and perhaps treatments for, their development disorder.

That opportunity will come through a new partnership between four community agencies that serve these residents and the Masonic Medical Research Institute, which is expanding into autism research. The partnership was announced Thursday afternoon at the institute.

“Autism is a common and complex disorder that causes lifelong disabilities for affected individuals and significant burdens for their families, society and schools,” said Gulhan Ercan-Sencicek, Masonic’s autism researcher. “We don’t know what causes autism. We think it’s primarily genetic. And we know that mutations in more than 100 genes have a role in the autism. If we know the underlying biology, we can develop the therapy to target the symptoms of autism.”

The agencies in the partnership are the Kelberman Center, Upstate Cerebral Palsy, the Resource Center for Independent Living and ADHD & Autism Psychological Services and Advocacy PLLC. They will provide something the institute, which is not affiliated with a health system, doesn’t have: samples to study through voluntary blood donations from the people they serve.

“Science is a team sport,” said Dr. Michael Kelberman, founder and board president of the Kelberman Center. “It’s not about individuals. It’s a team sport and you have to bring in people from all different areas in order to make real gains. I think that this whole effort here, everybody up here (at the speaker’s table) is about that team sport.”

DNA from the samples will be genetically sequenced and some of the blood will be used to generate pluripotent stem cells, which can then be used to create cerebral organoids, mini-organs that resemble the brain so researchers can better understand the mechanism of the disease, Ercan-Sencicek said.

“Using our ability on the research side, we think we can partner with these organizations to gain access to resources that can allow us to identify novel genes causal to autism, to generate inducible pluripotent stem cells and use genome editing to correct mutations that we potentially identify that can be a way to treat and cure autism spectrum disorders,” said Maria Kontaridis, Gordon K. Moe professor and chair of biomedical research and translational medicine at Masonic. “So I think together as a community, we can come together to find ways to cure this disease.”

Under the direction of Kontaridis, who took over the lab last year, the institute is slowly expanding both the scope and type of research it does, from strictly basic into translational research — which uses the findings of basic research to look for medical applications — and from only cardiovascular research into autism, neurodegenerative diseases, autoimmune diseases and diabetes, too.

“There’s no question that translational research, or research that moves us closer to clinical trials, requires cross-discipline collaboration,” Kontaridis said. “Such collaboration provides opportunities for sharing resources, expertise and techniques and together they generate preventative diagnostic and therapeutic tools necessary to really develop novel treatments and find ways to cure disease.”

The institute ended up moving into autism research after a series of three serendipitous occurrences, Kontaridis said.

First, she had wanted to meet the “remarkable cardiologist” Kelberman, who asked about collaboration in autism, she said. Then she was introduced to Ercan-Sencicek, a talented researcher who happened to want to move to Utica, she said. And finally, a new board member mentioned his interest in autism and the lab ended up moving into autism research, she said.

And Kontaridis isn’t putting any limits on the future. The collaboration could expand across the region and even the whole state, she said. And someday, if the institute discovers potential treatments for autism spectrum disorders, it could move into clinical trials for the first time.

For staff at the agencies involved, the partnership just made sense, they said.

“It was a no-brainer to sign onto this particular effort,” said Zvia McCormick, CEO of RCIL.

Kelberman said the effort will prove to be one more great thing about the area.

“The Mohawk valley has had some tremendous successes recently,” he said. “Anyone in the audience understands the forward momentum that we have. This is another piece of that.”